It is no secret that many technologies that we use in everyday life were primarily invented for space needs. These includes wireless headphones, computer mice, phone cameras, GPS, and even infrared thermometers that we use to measure body temperature.

Originally, infrared measurement technology was developed for measuring the temperature of stars and planets. Even though distant stars and their planets are inconceivably far away from us, scientists have devised many ways to detect them and uncover their secrets. For decades they have used infrared readings — or measurements of heat radiated — to better understand stars and planets. More recent advances include the careful study of the "fingerprints" created when light passes through a distant planet's atmosphere, which can tell us about its chemical composition.

Infrared measurement technology was developed by NASA's Jet Propulsion Laboratory in Pasadena, Calif., for missions including the Infrared Astronomical Satellite, or IRAS. IRAS measured the temperature of stars and planets by reading the infrared radiation emitted from them. This technology has been used in medicine later: thermometer almost instantly determines body temperature by measuring the energy emitted from the eardrum. Since it virtually eliminates cross infection, the tool is especially helpful in caring for newborns and the critically ill. 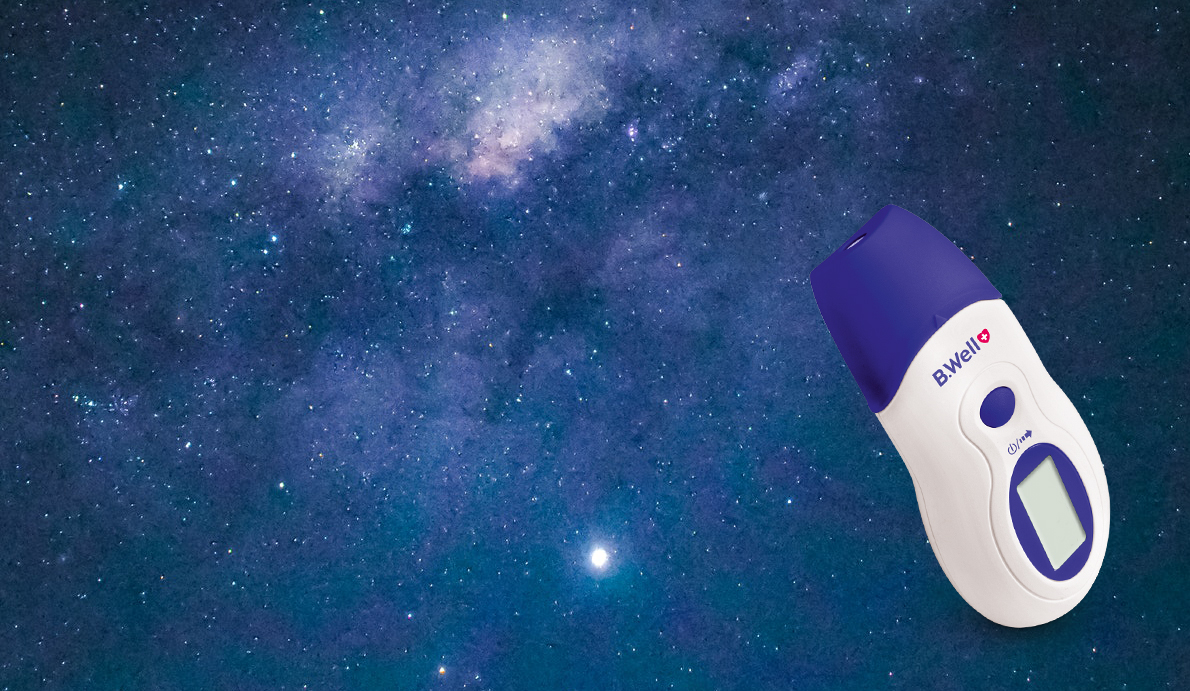 In 1991, Diatek Corporation of San Diego put a new infrared thermometer on the market. Early electronic thermometers had been used by some hospitals and doctors' offices for several years before that time, but this model was a pioneering effort to modify space-based infrared sensors for a medical infrared thermometer. There are several advantages of infrared thermometers over all others: they are accurate and safe; they provide greater temperature range and are able to measure the temperature of a human body, objects, air, liquids, etc.; their reading spead is very quick. Furthermore, they often have fancy design.

B.Well WF-1000 thermometer is also the successor to the space technology and measure the temperature by infrared radiation emitted by it (do not worry, it is totally safe). It can measure both ear and forehead temperature in just a second. Intuitively pressing a single button, you can immediately get an accurate measurement. The icons on the display will help you understand whether your temperature is high or not. The thermometer is made of safe plastic and contains no mercury or glass. WF-1000 can measure not only the temperature of the body but also objects, air, and liquids. Infrared thermometer is handy for parents and comfortable for babies whose temperature can be measured during sleep.

HOW TO UNDERSTAND THAT YOUR CHILD FEELS UNWELL?